St. Paul's prides itself as being a mission minded congregation. The Derricks' are one of many missionary efferts that we are supporting with our prayers and financial support.

Bios
Missionaries Elliot and Serena Derricks are passionate about investing their lives to help others learn more about Jesus Christ in their own language.

Elliot grew up on a dairy farm in Denmark, Wisconsin, where he learned about hard work, diligence and developed his love for the outdoors. After many short-term trips to Mexico while at Concordia University Wisconsin, he felt a call to long-term missions.

Serena spent her childhood riding horses in her hometown of Buckley, Washington. She felt God calling her to be a teacher in the 6th grade, which eventually led her to the mission field after graduating from Concordia University Portland.

Elliot and Serena met at a missionary orientation and were married in 2011. They have served in various fields with LCMS International from 2010 – 2016, which include Slovakia, Macau, and South Korea. They welcomed their beautiful daughter, Lydia, in March of 2015 in Seoul, South Korea. Their second daughter, Josephine, joined the family in January 2017 in Dallas, Texas.

While serving overseas, Elliot and Serena witnessed first-hand the importance of knowing the people’s heart language in order to effectively communicate God’s love to them. These experiences provided God an opportunity to place a passion for Bible translation in their hearts.

Prayers
Please pray for them as they serve with LBT and prepare to bring God’s Word to those who do not yet have the Bible in their heart language. 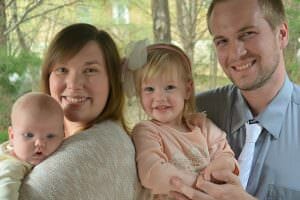